EDF needs to ensure the funding and profitability of its proposed EPR2 reactor before starting construction based on the design in France, according to the country's state audit office. The EPR2 is a simplified version of the EPR draft, the construction of which was affected by delays and cost increases in France and Finland. 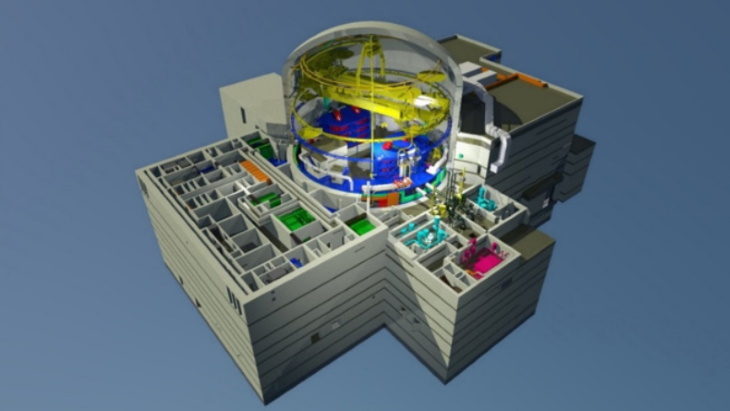 A section of the EPR2 reactor design (Image: EDF)

The EPR-2 reactor is a pressurized water reactor project developed by EDF and Framatome. It meets the general safety goals of the third generation of reactors. The aim is to take into account feedback on the design, construction and commissioning experience of the EPR reactor as well as operating experience of the nuclear reactors currently in operation.

In December 2018, Unit 1 of the Taishan plant in the Chinese province of Guangdong became the first EPR to go into commercial operation. Taishan 2 started commercial operations in September 2019. Construction of the Olkiluoto 3 EPR began in 2005 with the completion of the reactor originally planned for 2009. Due to various delays and setbacks, however, fuel loading is planned for later this year. The shipment of the fuel to the Flamanville EPR in France, which began construction in December 2007, is now scheduled for late 2022. Two EPR units are also under construction in the Hinkley Point C project in Somerset, UK.

In one report published the July 9th Cour des Comptes says the rivalries between Areva and EDF "led to the hasty start of construction of the first two EPRs in Finland and Flamanville. This inadequate preparation led to the underestimation of the difficulties and construction costs and the overestimation of the French nuclear sector at the expense of financial risks for companies in the sector. "

The report states that the 3.3-fold increase in construction costs, estimated by the EDF at EUR 12.4 billion (2015 value), and the at least 3.5 times the commissioning time for the Flamanville EPR compared to the original ones Forecasts "represents a significant variance". This is the result of "unrealistic initial estimates, EDF's poor organization of the project, lack of vigilance on the part of regulators and a lack of awareness of the loss of technical skills among industrialists in the sector."

The audit office added: "The construction of new EPRs in France can never be envisaged without clear prior answers to funding methods and the role of nuclear power in the electricity mix of tomorrow."

"The financial challenges are great. The construction costs for three EPR2 reactor pairs are estimated at 46 billion euros (2018 value)," said the Cour des Comptes Remarks. "Taking into account their construction, production and dismantling times, the decision to build or not to build future EPR will have ramifications up to the 22nd century.

The report contains a number of recommendations, including a review of the concept of the architect as a designer by separating the functions of the contracting authority and the designer. It is also recommended to include contracts in risk sharing agreements between the contractor and the supplier. The Cour des Comptes According to the EDF management, a six-monthly review of the strategy and risk projects should be ensured. Those responsible for large-scale projects should have the resources required for their implementation, in particular engineering, it says. Before starting a possible new construction project, EDF should conduct an exercise with all concerned actors to gain full experience with all EPR units built or under construction in France and abroad.