Students and parents have shared their mixed feelings as Scottish schools become the first in the UK to reopen when the lockdown is eased.

Local authorities across Scotland are taking different approaches to the timeframe for reopening for the first time since March 20th.

Students on the Scottish borders are returning today, as are some in the Shetland Islands gradually.

Alex Bisset, an S6 student at Kelso High School in the Scottish Borders, told the PA news agency he feels safe to return as additional hygiene measures have been put in place on campus.

But he's pessimistic about how long the school stays open.

The 17-year-old from Birgham said: "I'm pretty happy that things are starting to get back to normal, but at the same time I don't think it will last."

"I have a feeling that in not long time there might be another outbreak and we will all be sent home again."

Isla Findlay, an S5 student at the school, said she felt a little overwhelmed to see so many of her classmates after five months of lockdown.

The 16-year-old from Kelso said: "I'm a little nervous, but it will be fine.

"It's just how it's going to be different? I'm happy to see all of my friends – how are they going to deal with everything? It's a little bit scary.

Kelso High School principal Jill Lothian is optimistic about the students' return and says she doesn't want the pandemic to "define" them.

But she admitted that some parents are concerned about the move.

She said, "They came this morning, they were smiling, it was great to see them at school, and I hope they are happy to be back – it's about studying.

"I don't want Covid to define them and I think it's really important that we take this opportunity this year and move forward – and that's what we're going to help them with."

Parents' council chairwoman Gemma O & # 39; Brien, who has a daughter at school, said: "I'm nervous for the students, they have been with their family for five months and now the day has come when they & # 39; I have just got back to school with all of your friends, old and new, and all of your teachers.

"It's a huge step just to get here and I think a lot of you weren't sure when it was coming and if it would ever come this year.

"I'm a little concerned for everyone, but I know this is what everyone needs." 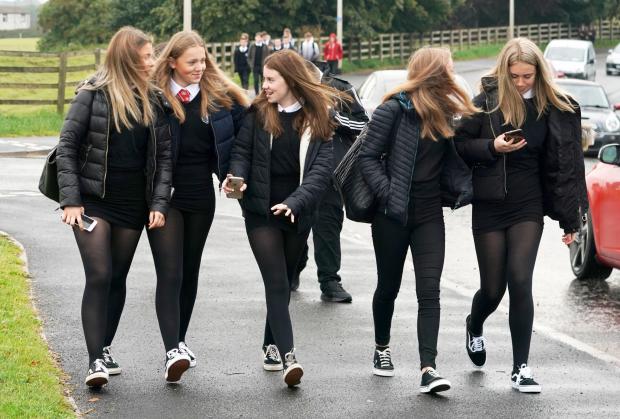 Elsewhere in Scotland, students will be returning from tomorrow. Many councils are running a gradual return before August 18 to allow all students to return to full-time work.

Social distancing will be present for adults and encouraged for older students, while young children are not expected to be.

Face masks are only required to be worn by employees who do not have effective social distancing, but anyone who so wishes should be allowed.

Fears have been expressed about how well prepared teachers are to contain the spread of the virus, as well as fears among returning staff.

A spokesman for NSPCC Scotland said: “We know that many children in Scotland have had difficult and traumatic experiences in the past few months.

“During the lockdown, mental and emotional health contacts with Childline increased and our NSPCC hotline made 40% more referrals to Police Scotland and local authorities.

“When children return to school across the country, it is critical that they receive the support they need to recover from mental and physical harm.

"The Scottish Government, local authorities and health authorities need to ensure that they have adequate resources to respond to likely increased needs for therapeutic services."

First Minister Nicola Sturgeon said the return of schools was an "important milestone" in the fight against coronavirus in Scotland.

She added: "Today's return has been made possible by the progress we have all made in suppressing the virus, but we know from all kinds of evidence here at home and elsewhere in the UK and Europe that progress remains fragile and we all really do need to continue to be vigilant and careful. "

Some parents might see returning to school as a way for them to get back to work, she said, but urged them to work from home if possible as it was "safest".

Meanwhile, the Secretary-General of the Education Institute of Scotland (EIS) Larry Flanagan said about 80% of its members had expressed "deep concerns" about the safety of schools reopening.

The union has filed complaints with the Scottish Borders and Moray councils for alleging failure to facilitate the gradual return of students and to properly consult the EIS and other unions and reach an agreement.