Car dealerships need to continue convincing customers of their measures to mitigate COVID-19 as concerns about the virus persist – and outweigh any other problem over the past 50 years.

While the relaxation of social distancing has allowed many retailers to resume escorted test drives and to forego face coverings – if certain criteria are met – the results of an Ipsos Mori survey have highlighted the need for continued reassurance in showrooms.

Ipsos Moris' latest results of over 1,000 consumers released this week found that 75% of the UK public view coronavirus as the biggest problem facing the UK ahead of the economy, Brexit and the NHS.

The figure was 3 percentage points higher than a survey conducted before the COVID-19 lockdown was eased and the highest concern the survey provider has seen in 49 years, suggesting that now more than ever, companies need to reassure their customers . 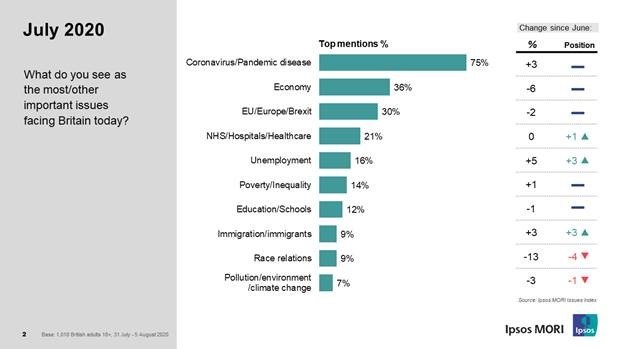 The day after the UK was officially informed of its slide into recession, the poll found that concerns about the economy are also higher than those about the post-2008 recession or Brexit in 2019.

Unemployment remained a key concern of 16% of respondents – its highest level in over three years – as the end of the state's Coronavirus Job Retention Program (CJRS) approaches.

While concerns about the overall unemployment rate are relatively low, those concerns are heavily concentrated in the 35 to 54 year olds, according to Iposos Mori.

Mike Clemence, researcher at Ipsos MORI, said: “Coronavirus is still the main concern of the British. Three-quarters mention it as a major problem for the country.

“This is the same level we recorded in the June wave during the lockdown. This suggests that the impact of easing restrictions on public concern about the virus appears to be minor – although it should be noted that a 75% score remains one of the highest scores we've had for a problem in 46 years have recorded. "

He added: We are also seeing the beginning of increasing concerns about unemployment.

"This is currently heavily focused on people aged 35-54 in more manual jobs. However, it is expected that this concern will increase as the UK Government's vacation program ends later this year."

The Scottish Motor Trade Association (SMTA) was assured this week that there is “no legal obligation” for car dealers north of the border to wear face covers, despite changes in the law coming into effect tomorrow.

In a letter responding to inquiries from the Scottish Motor Trade Association (SMTA), Directorate for Economic Development's Keir McDonald confirmed that retail staff would not be required to wear a mask that implemented two meters of social distancing or plexiglass partitions could.

However, given Ipsos Mori's survey results, retailers should consider the impact of a perceived removal of COVID-19 prevention measures in showrooms.

Safety should also continue to be provided with regard to vehicle disinfection.

New research by hand sanitizer expert FulviSafe released this week found that the vast majority of UK residents do not wipe the steering wheel of their vehicle before and after driving, which could lead to an increased chance of the spread of coronavirus.

It is said that dealerships “pose a high risk of surface transmission spreading germs” as a large number of different people can get in and out of vehicles.

FulviSafe found that 85% of drivers do not clean the steering wheels as a precautionary measure before and after driving.

Nicola Allsop, founder of FulviSafe, said: “Given the number of people looking to buy a new car, it is worrying that the vast majority of motorists are not taking the simple precaution of wiping the steering wheel before and after use. Dealerships need to be proactive Take steps to ensure the safety of employees and customers alike by regularly providing hand sanitizer. "